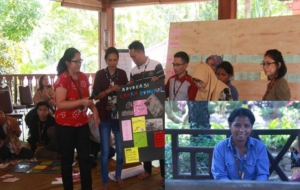 I represented Article 33 at the 2019 Linking and Learning event in Yogyakarta. That was the first time I met and had an engagement with Mama Banja. At that time, Mama Banja attended the Linking and Learning event representing the consortium Humba Hamu an East Sumba-based consortium. Mama Banja is a woman from the Ata caste, which is categorised as a servant class in the social structure of customary law community in Matawai Pawali, East Sumba.

Being connected with Mama Banja was the most touching and the most precious moment during Linking and Learning activities. Her story, her struggle for social inclusion in accessing land, has greatly influenced the implementation of our Voice project on inclusive social forestry. For Voice, thank you so much for connecting Article 33 with Mama Banja. Thank you so much for enabling us to learn from Mama Banja.