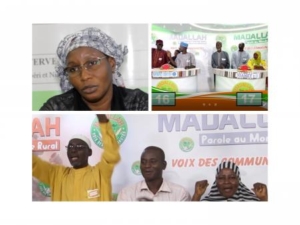 My magical moment with VOICE was on Wednesday 18 November 2020. That day, after a long day of work, I was in front of my TV set to watch the 40th edition of the game show Madallah which pitted teams of 3 people each, a woman, a man, a young person, all farmers. At the 25th minute of the game, the match was very close, when the host asked the last question that was to decide between the two teams, the senior member of the Kourfeye team wanted to propose an answer when suddenly, the youngest took over and gave the answer that saved their team from defeat, then senior and junior embraced each other with joy while the woman of the team, for her part, embraced them with a look of common mission accomplished. I marvelled at the merging of the members of each team into one voice, the voice of the quest for victory, and thought that in a split second the longed-for change had come about. The game succeeded where some long speeches have failed. It broke down the intra-generational barriers (male/female) and the inter-generational barriers (senior/junior) towards a common goal: victory.