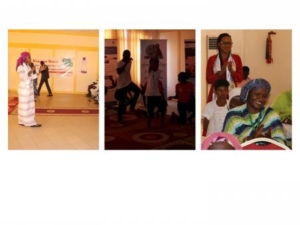 On this morning in October 2019, we were gathered in a huge hall, the one where we were organising the Kakakin Voice, the Niger talent fair. The pleasant scent of incense from a woman processor of agri-food products filled the room, the colourful articles of the women artisans almost gave the impression that a rainbow was being drawn. Marilou, the impromptu MC on the day, an eloquent and confident project leader, announced the entrance of young dancers to present a choreography. Without saying anything more. Suspense! This activity, which was entirely organised by members of several Voice partner organisations in Niger, was going to feature a succession of talents from the rights holders. Although I was one of the instigators of the event, I had not been able to attend the final rehearsals the day before. I was standing at the back of the room and found myself as eager as everyone else for the young dancers announced to make their entrance.

I thought I had the advantage of knowing that the young people who were going to dance in front of us were all hearing impaired and deaf. What I didn’t know was the degree to which they had mastered the dance steps and the fact that they could, although they couldn’t hear the music, dance to it and be in tune with each other’s steps. The choreography lasted no more than two minutes, and then, individually, each of the dancers moved closer to the audience to dance the steps they were most comfortable with. Every moment the music played, I felt pride and my mixed emotions went from joy to melancholy to joy and pride again. It was just amazing to see! My emotions peaked when I saw the reaction of the audience when our MC announced at the end of the performance “These young dancers are deaf”. They were clapping in sign language! It was just magical!