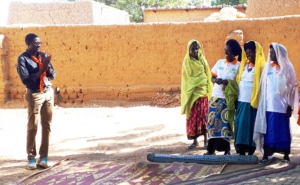 I joined Voice three years ago. I was quite passionate about development work, but I never thought that it would hit me this deep and transform me into the person that I am today. It all started on 10 December 2018. I was taking part in my first activity which coincided with the 16 Days of Activism against Gender-based Violence campaign. Voice and its partner TIMIDRIA in Niger had organised a day of meetings with women survivors of discriminatory practices commonly known as ‘wahaya’ (fifth wife) in the village of Zanguon Abillo, Tahoua region. Once we arrived in the village, we were warmly welcomed and given a place to sit and water to drink.

A few minutes before starting the activity, I decided to get to know the places and people of the village with my Monitoring and Evaluation glasses. I met a group of 4 women. They didn’t speak and had stood aside looking at the guests. I pretended to be a musician to create a climate of trust between us. As soon as I started singing they started to laugh. Shortly afterwards, one after the other, they also began to sing. From this group, I discovered Alhousna, the leader of the neighbourhood of women victims of discriminatory practices in Zangon Abillo, Rakia, who is the youngest of the group with a remarkable her-story and with dreams. For me, it was the first step of a very beautiful adventure that continues to this day.