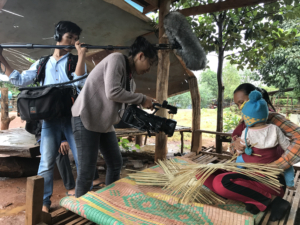 My name is Rany Phok and I was born and raised in Ratanakkiri province of Cambodia, where many indigenous people live. Growing up I saw the many problems that Indigenous women and children faced, including gender-based violence, early marriage, and lack of access to social services such as public education and proper health care.

In 2019, I got an exciting opportunity to learn filmmaking under the project “Amplifying Voices of indigenous women and discriminated groups through innovative multimedia”, supported by Voice and implemented by Bophana Center. I directed a film, “Don’t Give Up” which featured the resilience of a Kreng teacher. She teaches children in her community in Kreng language – one of the indigenous languages in Ratanakiri Province, North-Eastern of Cambodia.

#Nothing about us without us!