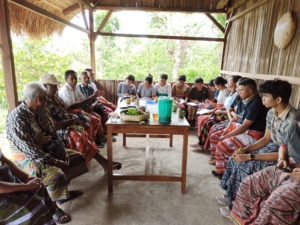 Being and Becoming Indigenous is a program that is important for us: how various cross-sector meetings are initiated and how the involvement of all parties including the church, local government, schools, traditional leaders, women’s groups, the younger generation in Mollo can be possible. We are proud to see the various spaces and opportunities that enable us to sit together, discuss, share ideas and innovations that are carried out equally and fairly.

Skol Tamolok then is present as a cultural school and a contextual-critical education model to learn Mollo’s local knowledge that is not obtained in formal schools. Moreover, Skol Tamolok is one of the cultural spaces that give women and young people more access to convey their aspirations. This program can be an example for stakeholders on how creative spaces are cultivated and how opportunities are given fairly and equally to all citizens without exception—reflecting on the history and culture of the Mollo people in the past, they were very accommodating for all parties. ‘Being and Becoming Indigenous’ is a learning platform focusing on indigenous youth which is held in three indigenous communities in two countries, namely Kasepuhan Pasir Eurih and Mollo in Indonesia (RMI and  Lakoat.Kujawas ) and Dumagat-Remontado in the Philippines with AFA  and PAKISAMA.