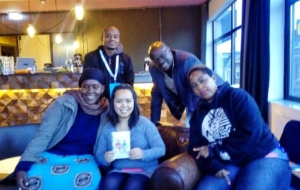 Someone told me, “A person from a deprived environment would say, ‘there’s no opportunity’. But in reality, there would always be opportunities along the way. The youth themselves are the capital, and their environment is their opportunity.”

Magic started in January 2018 when I was still an intern with the Coordination Team in The Hague. They just organised the first global learning event called Indaba. As part of the Indaba, multi-country Innovate and Learn grantees were invited to create a space to learn from each other. Their projects focused on the inclusion of rightsholder groups and what the key elements were like supporting awareness, empowerment, attitude change, and transformative change in practice. Then I was assigned to pitch for YADEN in their work for youth in conflict with the law (YICL). As part of the learning exchange, I had to pitch their project to all the participants so that their project can be put in the spotlight. After pitching their project to everyone, their project, #ithechange got one of the highest votes. It was a fulfilling moment for me since I was inspired by their methodology of using simple games to better communicate and interact with the YICL. The following day, the YADEN team, gave me a postcard made by one of the youth they are helping in their project. They thanked me for the pitch that I did for their project and took this photo with me to capture the moment. It was a simple postcard, but it created a huge light in my heart and I felt validated on why I decided to work in this field.

My magic started when I least expected it. I am Arisa, Support Officer, and this is my magic moment with Voice