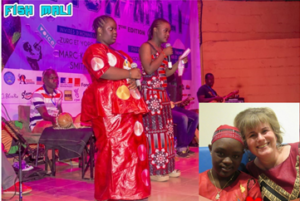 I first met Housna, a young woman in 2018 during a visit to Housna Ka So a community centre in Bamako, Mali. The centre is run by her wonderful mother who named it after her daughter so Housna could have a place to meet her peers. It is truly one of a kind in Bamako, a place where youngsters with all types of intellectual disabilities can play, learn, dance and simply be themselves. Through Agoratoire, a Voice Innovate and Learn partner, the youth learn to express themselves through art, whether slam poetry, painting or drawings. I met Housna again, this time in the Netherlands where she was a participant in the NOW-Us! awards. The inserted picture shows us at Upside Café where Housna was being served by Dutch people with intellectual disabilities. But the true magic happened in November 2020 during the annual Festival d’Inclusion organised by Agoratoire. In front of hundreds of people Housna slammed on stage Je veux etre comme tout le monde. I had goosebumps and knew the magic was happening right there and then. Because representation matters….